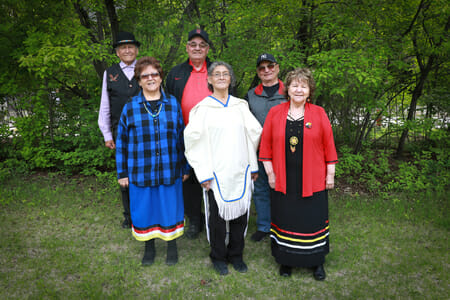 Six new members have been appointed to the National Centre for Truth and Reconciliation (NCTR) Survivors Circle to advise the Centre’s work to ensure Residential Schools and their legacy are never forgotten. They follow on the work of the previous group of seven Residential School Survivors who dedicated the last two years to ensure that Survivors’ voices and perspectives remain central to NCTR programs and policies.

“We want to acknowledge the 2017-2019 Survivors Circle’s passion and commitment to the work at the Centre. Their knowledge and guidance helped build the NCTR and we will continue to rely on them as we move forward,” says Christine Lenze, acting governance secretary at NCTR.

The new Survivors Circle members are:

“These Survivors, and their experiences, are at the core of everything we do at the NCTR,” says Ry Moran, director of the NCTR. “They provide guidance and advice to the NCTR, the Governing Circle, the University of Manitoba, and partners on anything important to the broader Survivor community.”

Survivor Circle members spend two years at the NCTR, and are an integral part of the NCTR’s the work of Truth and Reconciliation across Canada.

“I took the initiative to work on my own healing process for at least thirty years,” Bruyere says. “I have worked hard to get where I am at and very proud to be chosen to sit on the NCTR Survivors Circle. My reason for wanting to sit on the circle is to learn from the other Survivors and be a voice for Survivors from my Ontario region, especially for those who are still in pain; I want to help support change for all Survivors. I am excited, however, I understand the huge responsibility of this position and take it very seriously.”