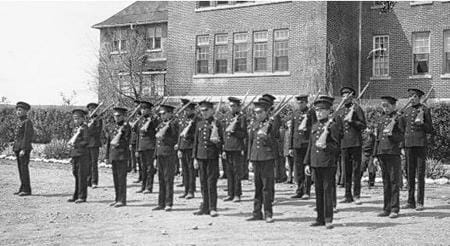 Residential School children joined the Cadets to escape the school, and it got them on the front lines. (Photo: St. Paul’s School Cadets, 1943)

Residential School children were among many who joined the fight overseas during the First and Second World Wars and the Korean war. They fought bravely and used their own traditional culture and language to succeed.

Like arts programs and sports programs, students joined the Cadets program to escape the harsh realities of Residential Schools. They would practice diligently to keep themselves busy and out of the school; their diligence resulted in them excelling.

“I used to go to Army Cadets once a week on Thursday nights,” Micheal Cheena, Survivor, said, as recorded in the Survivors Speak section of the TRC Final Report. “I kind of liked that because it was something to do, you know, during the week, other than sit around and do nothing.”

Children marched, did drills, practiced shooting, and stood at attention for long periods. Many felt that life at the schools prepared them for the armed forces.

“I went to navy boot camp,” said Survivor Alan Knockwood, Survivor, as recorded in the Survivors Speak section of the TRC Final Report.

“Standing in line and doing PT in the morning, or what have you, and having the chief petty officer, or drill sergeant, in some cases, holler at me. I would stand there at attention and look at them and say, ‘You ain’t got nothing on Sister Claire or Brother Sampson. I’ve learned and heard something stronger than this.’”

All three sons of Chief Mountain Horse of the Blood reserve in Alberta attended St Paul’s Blood School in Alberta, which established a Cadet Corps in 1912, the first of its kind. Eldest son Albert Mountain Horse joined the Cadet Corps as a summer training program and served as a lieutenant in the Canadian Militia.

According to the History section (Part One) of the TRC Final Report, Albert was the first Indigenous person to join the First Canadian Expeditionary Force in Western Canada and the 17th person to attest in Calgary when World War One was declared.

Mike Mountain Horse was known for his traditional buffalo hide robe, on which he documented his experiences while at war through drawings as a way to maintain and practice his own beliefs.

One experience in the war was during the Battle of Passchendaele in 1917. Reported in the Calgary Herald “He was shot several times and hid in German trenches for four days. But while making his way back to his fellow troops, he came across several German soldiers and captured them.”

Remembering them: Bravery, duty and survival

The TRC Final Report notes that there were many attempts to extinguish the culture of the Indigenous soldiers through Residential schools, cadet training, and service in an imperial army. Yet men were strengthened through their beliefs and were able to use their traditions to survive and succeed.

“The war in Europe proved that the fighting spirit of my tribe was not squelched through reservation life,” Mountain Horse wrote. “When duty called, we were there, and when we were called forth to fight for the cause of civilization, our people showed all the bravery of our warriors of old.”

On Remembrance Day, we remember the veterans, who fought and sacrificed their lives for Canada over many years. But Indigenous veterans also joined the war effort to fight for their families and communities at home and for a country that treated them as though they were nothing.

Today we acknowledge all those Indigenous veterans, and say thank you to them for their bravery and sacrifices. Today, we honour and remember you.